“Usually, paper promotions are lightweight-a child with a butterfly with a lot of embossing and spot varnish,” says principal/designer Jurek Wajdowicz. “We wanted to work on a promotion that would be relevant and reflect the work closest to our hearts, human-issue photojournalism.” And photographers, he says, are often eager to become the subject of a Bravo series. “There is a certain sex appeal about the large size of the publication. Serious photojournalists rarely get to see their best work published in such a bold way, with such big images and strong layouts.”

A showcase for the design firm and the paper company, Bravo is not purely about photography. Type is sometimes placed prominently on photographs, as was the case in Larry Towell’s edition. In one spread, for example, a full-bleed, double-truck photo of children in a lake is interrupted only by a poem. The type-including Towell’s copyright notice-is stretched out across the lake, gently blurred by the rippling water. Wajdowicz says he likes to experiment with photos and type, and he places images with a strong sense of drama and rhythm. Says Wajdowicz, “We’ll go from an explosive page with the photographer’s name in huge type that bounces around the page- like with the Eugene Richards’-then move to a very quiet image for the next page.”

How do the photographers react to this mixing of media? “They all know Bravo is a collaboration with a design firm. I’m not saying they love having design elements imposed on their images, but many have said it gives them a chance to see their work in a new light,” Wajdowicz says. “This is also mollified, I think, by our constant dedication to being faithful with cropping. When it comes to such crucial issues, we unequivocally stand on the photographer’s side.”

EWS works with photographers in a different way than most design firms. For example, they want to see every image made, with the exception of those that suffered from technical gaffes. “We’re allergic to censorship and insist on no pre-editing,” Wajdowicz declares. “Lisa and I have a certain story in mind; we think of it as a movie, and critical creative decisions are made based on seeing all of the images. With a pre-edit we’re likely to lose the fluidity of the truth.”

They also decline to work with photographers’ representatives. Says Wajdowicz, “We get personal and intimate with the photographers about the project and the work. That is hard to do when there is someone-whose main interest is often the daily rate-standing between us.”

EWS spends much of its resources designing annual reports for nonprofit organizations like The United Nations, The Rockefeller Foundation and The Girl Scouts of America. “Working mainly for nonprofit groups was a conscious business decision we had made toward the end of the Eighties,” Wajdowicz explains. (He and cofounder Matt Emerson parted amicably several years ago.) “We had been working for companies like American Express, but I’m much more interested in information than persuasion.”

For principal/senior art director Lisa LaRochelle, the decision to drop most of her corporate work was a matter of staying alive creatively. “In corporate work your design is not your own. If the CEO likes blue, you have to work that color in a big way,” LaRochelle says. “With the nonprofits we have a lot more free rein. Most of the time we show them what we’d like to do, and they are delighted.”

“We always have creative control, or we don’t do it,” Wajdowicz adds. “We have to say no when we’re not offered creative freedom in order to do effective work. The worst thing that can happen is that we don’t get certain assignments. I grew up under Polish communism; I know there are worse headaches than not getting a particular client, even immersed as we are in [New York], a city that is run by fear and greed. However, at the end of the day the unavoidable fact is that we’re only as good as our clients allow us to be.”

Turning down assignments, he says, actually helps them do better work. “We don’t get spread too thin from a business or creative standpoint,” he explains, adding that competition isn’t a big concern. “As far as I know, we’re the lone rangers in this field. . . . Of course there is always the temptation to grow bigger than an eight-person firm. Then I would become a manager, and that wouldn’t work for me. I’m a designer who is in business, not the other way around.”

Not known for daring design, non-profits seem to welcome the creativity that EWS brings to projects. “With human-issues pubications there has been a tendency to think you can do any crap in design because everyone knows how important the issues are-and we strongly disagree,” Wajdowicz says. “We think that we can make the organization’s message even more powerful through good design.”

Reprinted with permission by PDN Magazine. 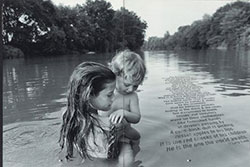 Canadian photographer Larry Towell, a member of Magnum, is so independent-minded that he is loath to accept most assignments. Thus he was understandably dubious about having his work used in a paper promotion… Read more >

One of the more striking editions of the BRAVO Photo Masters Series is that of New York-based photojournalist Alex Webb. The Bravo images were pulled from his files and feature some of his best-known work, along with… Read more >

One of 1999’s more compelling photojournalism books isn’t a photo book at all: it’s the Rockefeller Foundation’s remarkable 1998 annual report. This is an annual report unlike any other. The entire 120-page book was photographed on assignment by Antonin Kratochvil in his gritty… Read more >